Join RIP the Undertaker as he gathers bodies when the sun goes down… When Hollywood’s dark side comes to LIFE! Follow his flickering candle as he leads the brave souls on foot down the Notorious Walk of Fame… and INFAMY!

RIP The Undertaker will recount 100 Tragedy-Filled years that allow mourners to pay their respects at Horrific Haunting Grounds, Creepy Crime Scenes and Foreboding Famous Landmarks. Not every Hollywood Story has a happy ending and sometimes greater fame is achieved in DEATH… than in life.

RIP The Undertaker will reveal the scary sights, spooky sounds and stinky smells that define the Tantalizing Tarnished Star that is Tinseltown. The 2-Hour Walking Tour covers a 1-mile bloody trail.

Each guest on this intimate tour will have their headset to hear to make sure you don’t miss a word of The Undertaker’s tales.

Kindly dress in black to mourn the dead. Featured on the popular TV show, America’s Most Haunted, the Casablanca Inn in St. Read more… 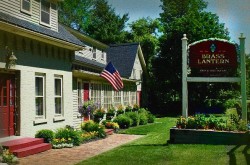