It has been said that the mythology of the Hallowed Haunting Grounds is as mysterious as its very ambiance. Indeed, the shadowy statue of an angel that one first encounters upon arriving at the graveyard can be viewed as both consoling and disconcerting. Some say they can hear her humming softly to the baby she holds as she keeps watch over the graveyard.

For thirty-three years, during the Halloween season, there appeared at a home in Studio City, California a display of mysterious illusions. It was known as the Hallowed Haunting Grounds. Hundreds of very appreciated visitors made seeing the display a part of their annual traditions.

It is very sad that all things must pass, and this Halloween display was no exception. With extreme gratitude to neighbors for their patience, friends for their support, and families for their understanding, the hosts of the show moved on to other endeavors.

Posted in Graveyards and Haunted Houses 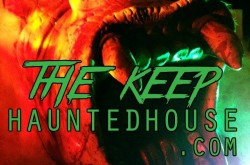