Is the Millennium Biltmore Hotel Haunted?

Even if you never heard of the Millennium Biltmore Hotel in Los Angeles, you might recognize it. This legendary hotel made appearances in films and television shows like Chinatown, Entourage, Fight Club and Columbo. Built in the 1920s and opened in 1923, the hotel is a cultural landmark in Los Angeles and one of the city’s most haunted places as well.

Ghosts of the Biltmore Hotel

One of the more common stories involves a ghostly troop of soldiers passing through the lobby. It isn’t surprising that some guests see the men walking through the hotel or hanging out in the lobby. The hotel served as a temporary boarding house for sailors arriving in Los Angeles prior to entering World War II. Guests may also catch a glimpse of the Black Dahlia herself. Elizabeth Short, the infamous unsolved murder victim, allegedly visited the hotel just before her death.

The second and ninth floors are among the most haunted. Guests staying on the ninth floor sometimes hear the sounds of a little girl giggling and her footsteps racing down the hallway. Others even spotted her watching them from the corner of their eyes, but when they turned, the little girl was gone. Those staying on the second floor may also encounter the spirit of a former nurse.

Guests of the hotel also claimed that they saw a woman in black in the lobby, and workers recall hearing the sounds of a party taking place on the first floor. At least one person encountered a ghostly little boy as well. No one who visits the Millennium Biltmore Hotel knows what they might see or experience.

The Black Dahlia last seen at the Biltmore Hotel

In 1947, Elizabeth Short was last seen alive at the Biltmore Hotel in Los Angeles. Short went missing on January 9th and was found on the 15th of January, 1947. Her tortured and naked body was sheared in half at her midsection and left in Leimert Park, Los Angeles. Her body was found completely drained of blood and posed intricately, which sounds like something out of an episode of Dexter. Elizabeth Short was nicknamed “The Black Dahlia” by the media who made every effort to sensationalize the story beyond its already morbid details. Short’s murder is still one of the oldest unsolved mysteries in Los Angeles. 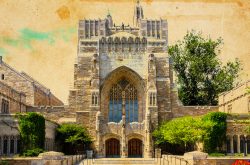