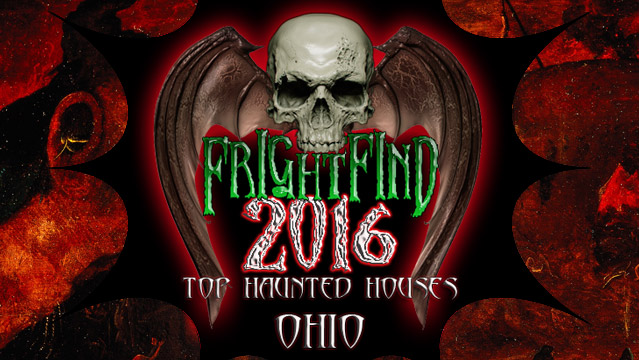 Don’t Be Late For Class! A past winner with Fright Find as well as many other major publications, Dent Schoolhouse in Cincinatti, Ohio is widely considered one of the scariest haunted houses in the country. The Dent crew has some of the highest standards of acting, makeup, set design, and storytelling in the business. In fact, the legend that surrounds the 1800’s schoolhouse alone is enough to get your heart pounding—think missing (murdered) children and a homicidal Freddy Krueger-esque janitor. Hit this attraction and you’ll long for the days when your worst school-related nightmares were about forgetting to study for an exam. Top marks if you don’t tap out early.

This brand new haunt for 2016 is taking over Eastwood Baseball Field through out the month of October. Don’t miss out on this 3 attraction haunt. It’s a homerun!

Winner of the Guinness World Record 3 years as the Longest Indoor Haunted Attraction in the world! Besides the 150,000 square foot haunt, they offer 6 escape rooms.

27 years of haunting has taught these guys a few things. It’s obvious in their constantly changing attractions.

Three attractions all for the price of a movie. Don’t skip this one.

This is a must stop for people with little ones that get spooked easily. There are no actors and nothing gory. It’s also a charity haunt so bring 2 non perishable foods and $2 to get in.

This may be the deal of the year. 4 haunted houses, one haunted trail, zombie paintball, and something called a Demon Drop (you have to see it to believe it). All for one price!

If haunted houses and corn mazes aren’t your thing, try wandering through a haunted cave instead. 80 feet below and containing over 30,00 live bats! I’m Batman.

$20 gets you in the door, a t-shirt, can koozie, and a picture. Screams are free.

This charity haunt offers unlimited trips through their 3 terrifying attractions for only $20.

See all our Haunted Houses in Ohio >>