Published by FrightFind On August 7, 2020 Leave a response 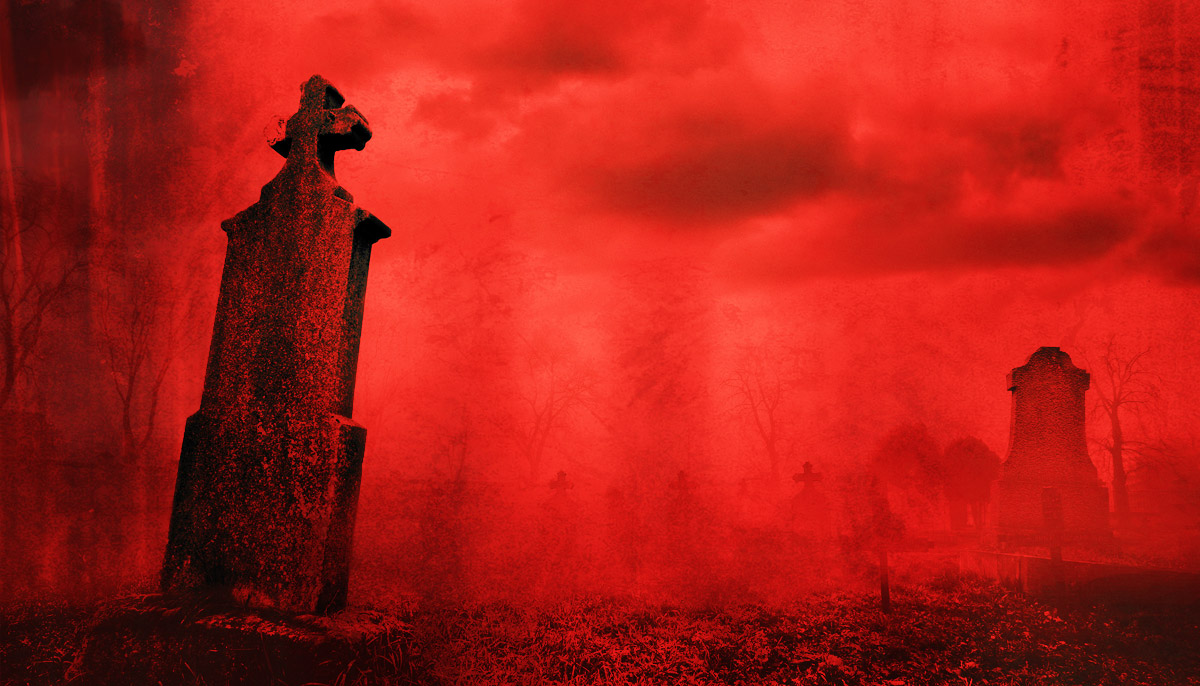 No other city in the United States has more haunted cemeteries within a city limit radius than New Orleans. Plots of land, some carved out centuries ago, were fashioned with beautifully haunting architecture that remains standing to this very day. Here’s a list of the top five haunted graveyards in New Orleans and why you should visit them. 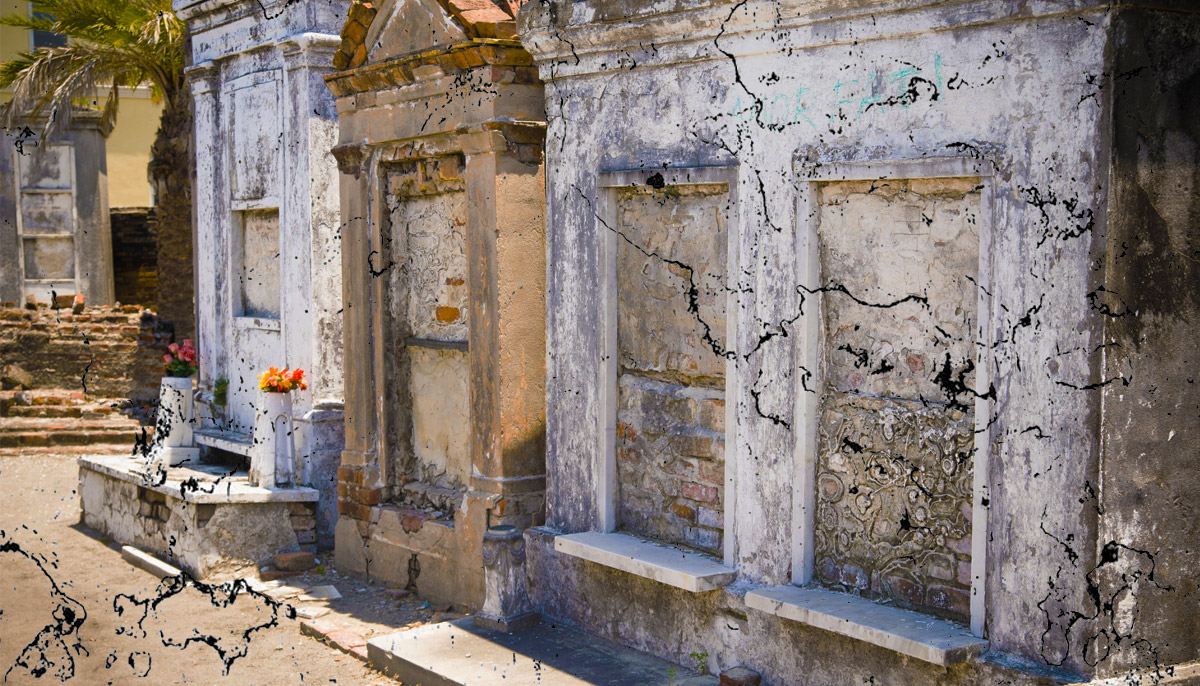 Right in the heart of New Orleans, St. Louis No. 1 Cemetery is the most visited and most popular cemetery in all of New Orleans, let alone in the United States. Named after the nearby St. Louis Catholic Church inside the famous French Quarter, this beautifully gothic graveyard dates back all the way to 1789 when the first groups of locals were to be buried there. One of the most prevailing theories is that the activity in the St. Louis No. 1 is high because of its most famous posthumous resident. The Voodoo Queen herself, Madame Marie Laveau is buried inside the cemetery gates.

Another popular grave and spirit inside the St. Louis No. 1 is that of 19th Century sailor Henry Vignes who is said to haunt his family’s tomb. For decades visitors have talked about a tall, pale-looking man with intense eyes who appears from out of nowhere and asks if anyone has seen his papers before disappearing behind a headstone. Restrictions in the cemetery are tight and anyone wishing to visit is better served with signing up for one of the local daylight tour groups. 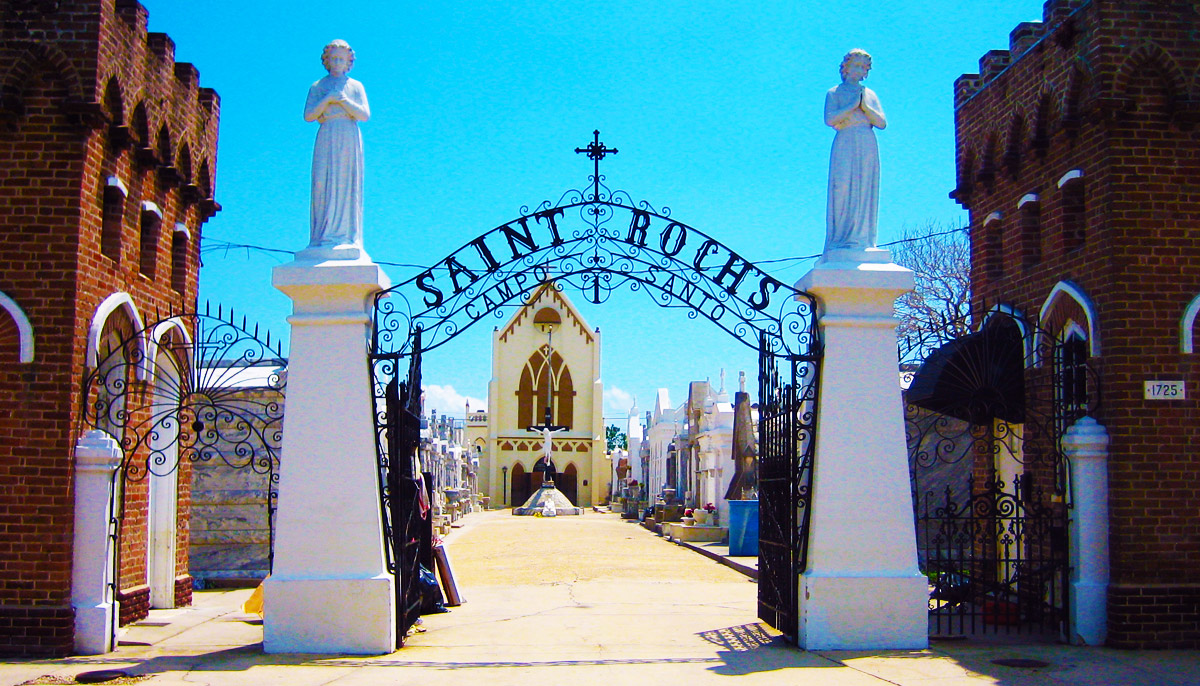 The little known St. Roch Cemetery in the middle of the city has earned a reputation of being one of the more haunted places to visit. The history behind the origin of the St. Roch neighborhood goes back to the mid-1800s. The cemetery itself holds one of the rare paranormal distinctions of having a ghost dog on the premises which itself is ironic considering St. Roch is a patron saint for dogs. Over the years many visitors have seen a big black dog with shadow-esque features strolling throughout the rows of headstones. Another ghostly specter resident to the cemetery is simply known locally as “the Hooded Ghost.” There’s no known origin to this spirit that is described as wearing a dark-colored robe with a hood. The Hooded Ghost’s face has yet to ever fully be revealed which certainly notches up the scare factor on this cemetery. 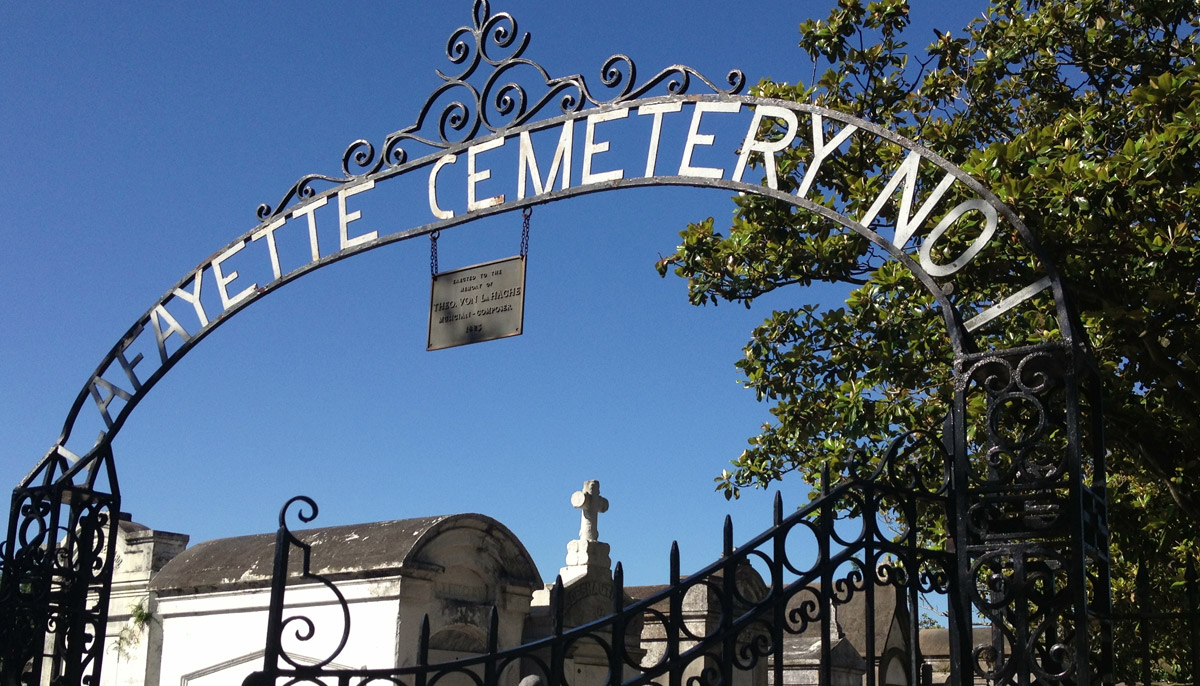 No numerical relation to St. Louis Cemetery No 1. and situated within the famous Garden District of New Orleans. This very haunted cemetery is dated all the way back to 1832 and holds one of the larger amounts of Irish graves anywhere to be found. People who fell victim to the Saffron Scourge yellow fever epidemic of the 1800s were buried here and it is believed to contain over 7,000 graves, but also contains an untold number of ghosts and spirits as well.

The most fascinating aspect about the Lafayette No. 1 Cemetery is that it’s not haunted by a spate of famous ghosts from historical tombs on the property so much as the haunted reputation is based on the visitor experiences with the paranormal here. Strange sounds run the gamut in the permanently haunted grounds as walking tour visitors have been known to hear sobbing within close earshot. Tears in such a place are to be expected, but not when nobody else is standing around you at all! EVPs (electronic voice phenomena) have been captured in all areas of the cemetery grounds to include the words: “hospital”, “fever”, and “help me”. A burial plot here is rumored to cost upwards of $200,000 for a family, which combined with the paranormal factor makes this an absolute must-see! 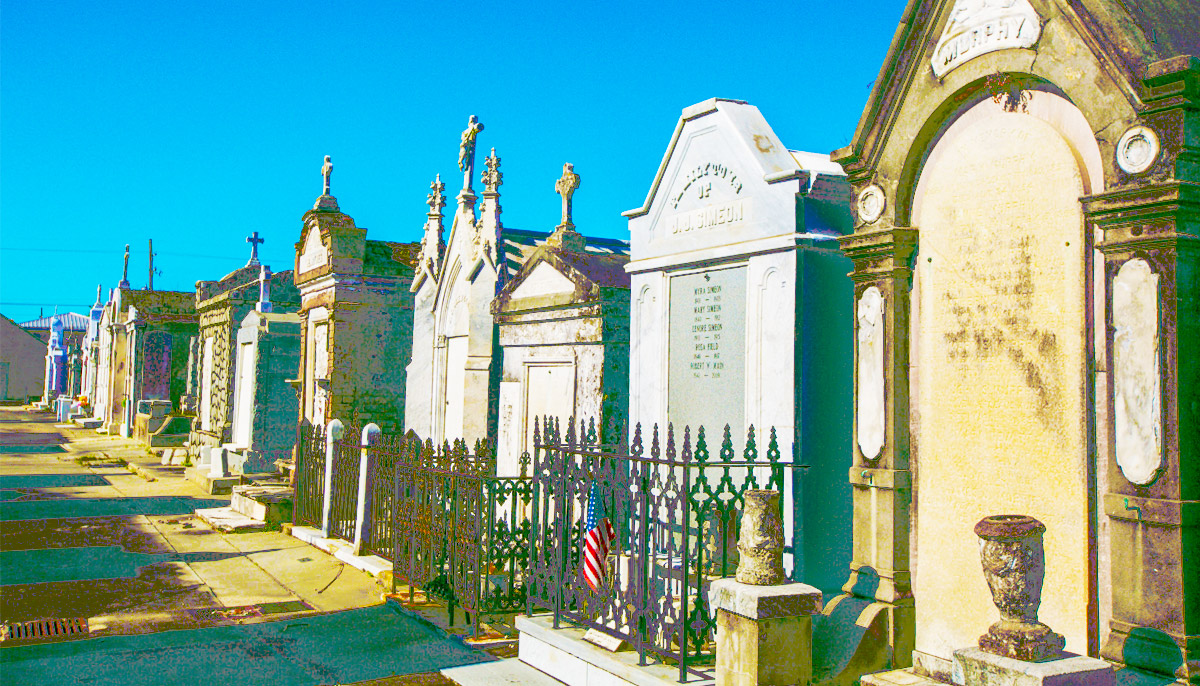 The Metairie Cemetery sits in the lower easter portion of the Metairie area which of course is just a couple miles north of downtown New Orleans proper. One of the more popular haunted areas of this cemetery is the grave of a former New Orleans madam named Josie Arlington who helped run the red-light district areas of the city which flowed from her own prestigious brothel. Josie’s mausoleum at the Metairie stands nearly twelve feet tall and is built entirely out of granite. Most impressive is the granite statue of a woman whose hand is lovingly placed against the doors as if she were in mourning.

The most haunting aspect of this tomb is that visitors and sextons employed at the cemetery have claimed that the statue has disappeared completely at times and reappeared in other parts of the cemetery! The bizarre paranormal activity doesn’t stop there with this particular grave, as on Valentines Day every year (the anniversary of Josie’s death) the granite flames atop her former tomb are said to briefly turn into fire and burn before physically manifesting back into granite! 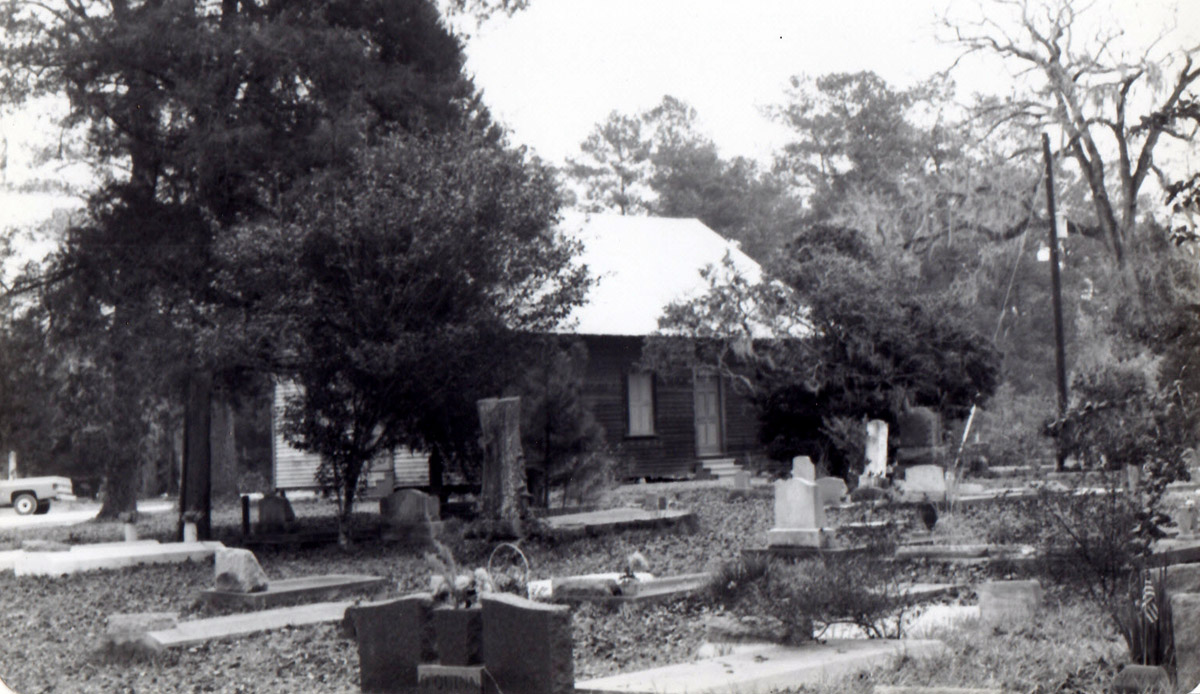 Alright, this one is admitted located outside of New Orleans in Edgerley, but for those who just love a ghost-filled cemetery to visit, then this one is surely a must-do on any ghost tour. Consecrated back in 1827, the grounds are officially haunted by a mysterious entity dubbed, “The Gatekeeper”. Oral legends from area locals claim that the stories began with people witnessing a brightly lit mist that would float about the cemetery in the dead of night. Nobody has ever been known to approach it as those (un)fortunate enough to see it have explained that there is a sense of dread and uneasiness. Visitors to Big Woods have claimed that upon coming across the shadow of the Gatekeeper, they immediately look to leave the cemetery only to find that their car engines fail to start preventing a hasty escape! This cemetery is well worth the visit for any paranormal enthusiast.

Most Haunted Cemeteries in America