Most Haunted Universities in America

Published by FrightFind On March 30, 2020 Leave a response 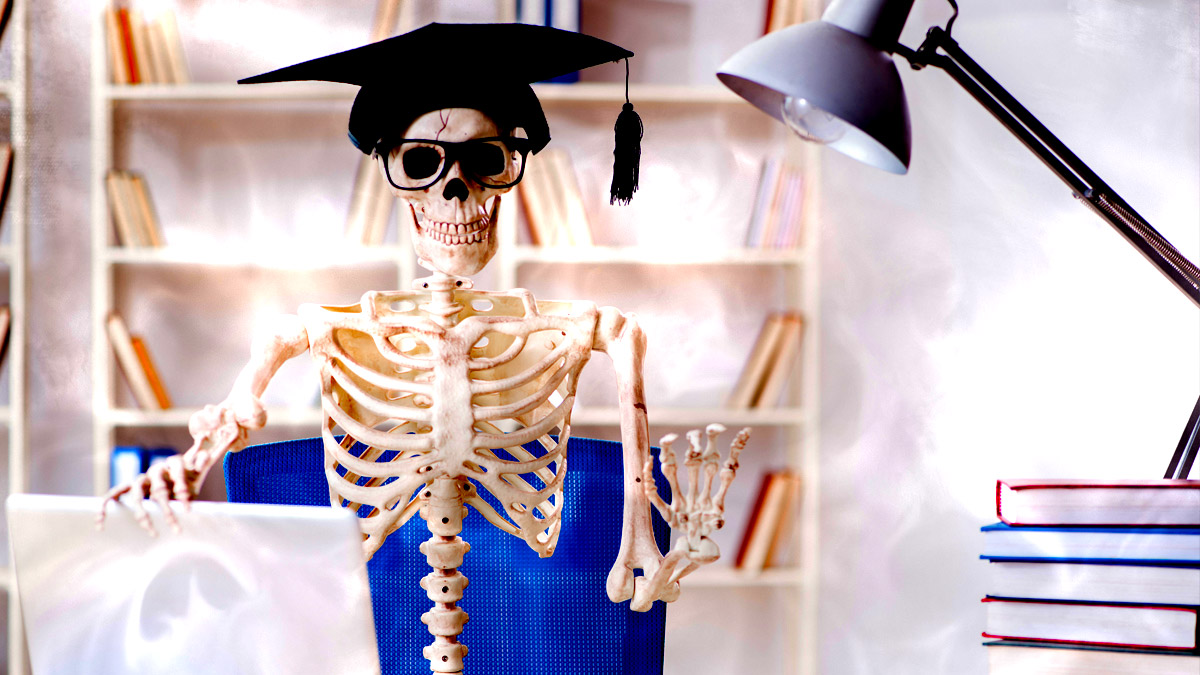 Among some of the oldest buildings out there in America today are our universities. The age of these college campuses even surpasses that of some statehoods being founded. Think you’re really alone in the library on a quiet evening studying? Was your dormitory part of an unholy campus ritual? Check out this list for some of the most haunted universities in the entire United States.

The University of Tennessee at Chattanooga 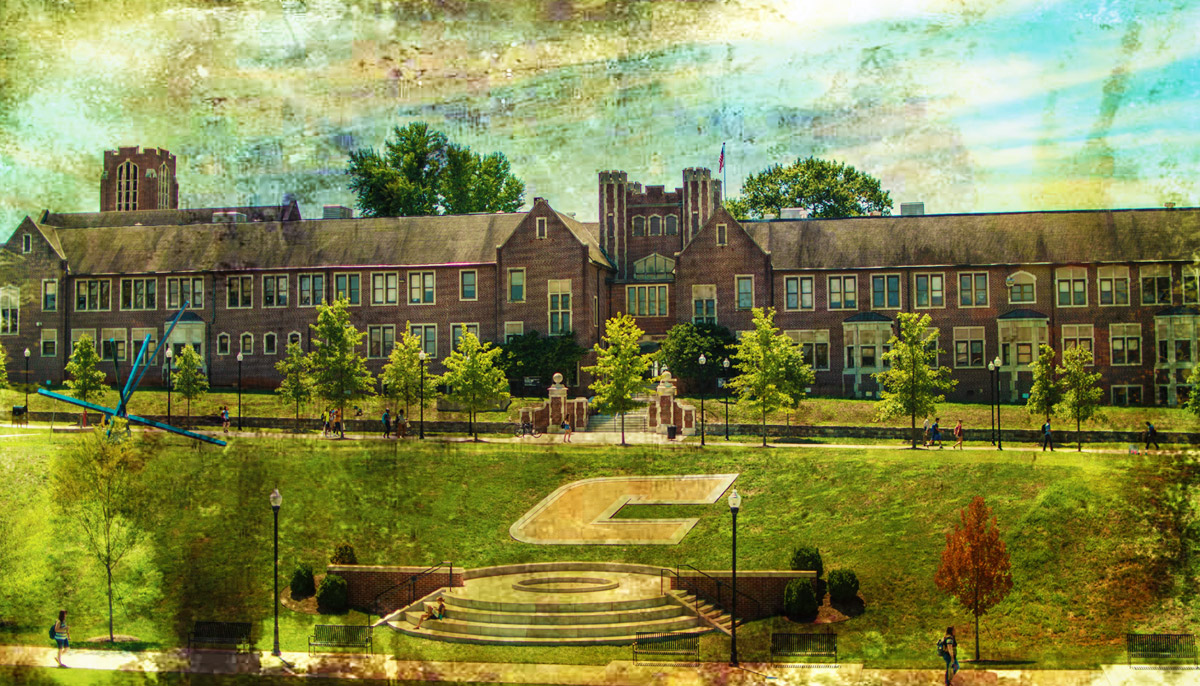 Among one of the many secondary battle sites to the Civil War is the city of Chattanooga, Tennessee. In a supernatural twist, it is not the Civil War battle sites around the city that are reputed to be haunted, instead, it is the University of Tennessee at Chattanooga that is said to hold all the ghosts. Hooper Hall has doors opening or slamming with nobody there and heavy fast footsteps on the antiquated tile floor.

Students report feeling watched by an unseen presence that seems to bring a chill with it. Despite being an on-campus church, the Patten Chapel is haunted by the spirit of a woman dressed in white. She has been seen in both the daytime as well as night time, drifting for an instant by stunned students and agog faculty members. Disembodied Civil War soldier spirits in the former medical college building? This university definitely has a 4.0 in Ghosts 101! 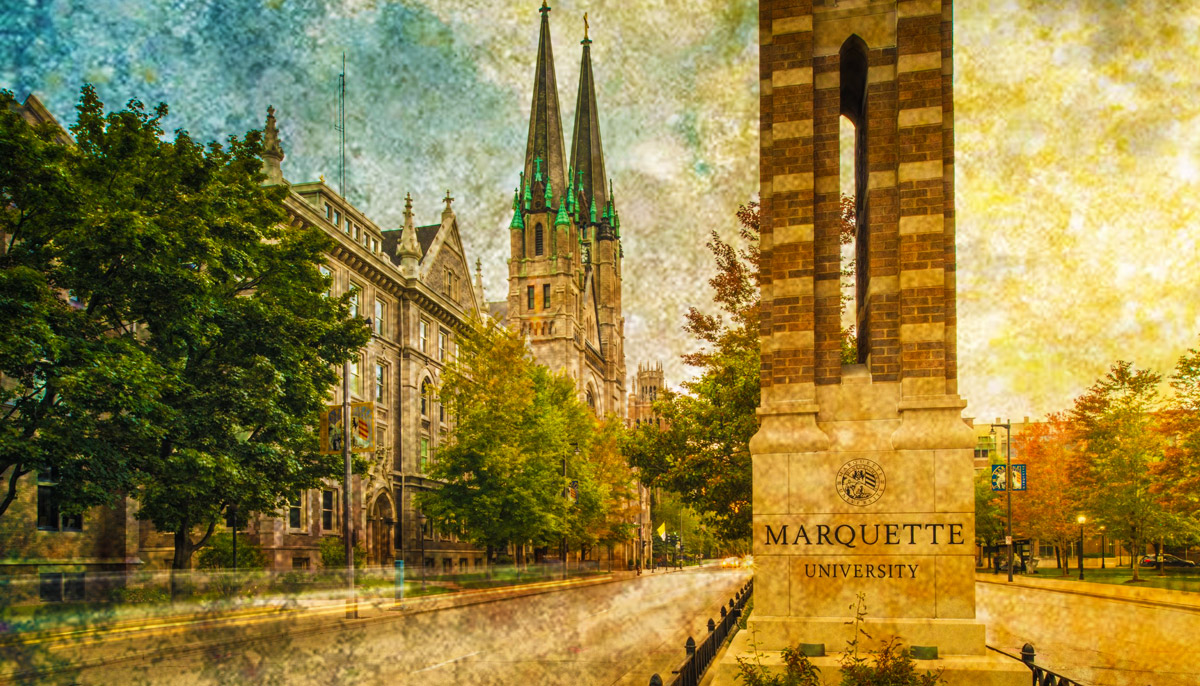 Marquette University was founded all the way back in 1881 and stands as a private Roman Catholic school that was initially built by the Jesuits to help with the influx of the German immigrant population at the time. But being built by such holy men and means, is it safe from the supernatural?

One of the most haunted places on campus is within the Schroeder Hall dormitory, particularly on the ninth floor is where most activity has said to taken place. One student in a room is reported to reach for his Rosary and have his ankle snap! Disembodied sounds and shadows got so bad at one point in time that a priest was brought in to bless the room to quiet down any activity. Another student claimed that ectoplasm had even begun leaking down a wall at one point in their room. And even at Mashuda Hall, objects that levitated and moved caused such a disturbance that there is a long-standing rumor around campus that an actual exorcism was performed in the hall so as to end the paranormal activity. 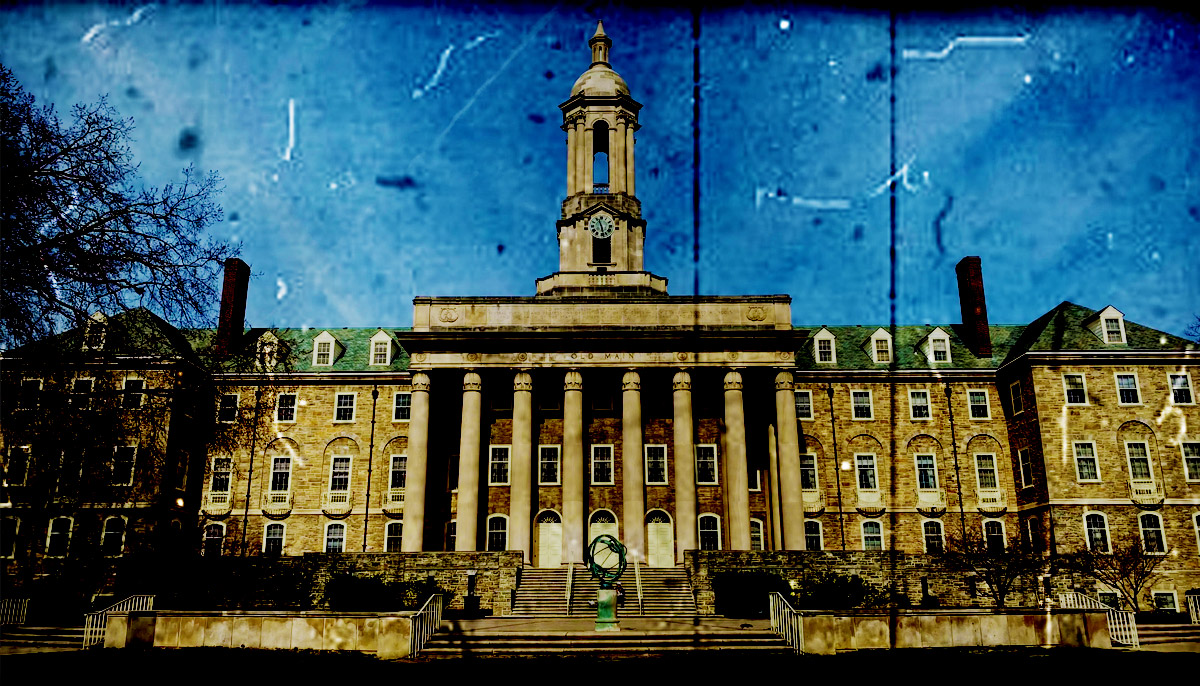 Long considered to be one of the premier universities in the northeast area, Penn State University has been a cornerstone for academia to all those seeking higher knowledge. But your friends at FrightFind are here to tell you, they’ve got ghosts! A campus library is said to hold the spirit of a murdered student who to this very day still tries to break through to the living to reveal her murderer. Atherton Hall is one of the oldest on campus, and it should come as no surprise to anyone that it has a ghost, the spirit of Frances Atherton, late wife of the school’s former president. Doors slamming and odd noises sure, but at other times her spirited has been spotted as if checking in on the students.

Schwab Auditorium is another campus haunt that many believe contains the spirit of a former janitor who still makes their presence known. Scratching sounds about the floor, doors opening and closing, heavy footsteps in empty areas, and objects being mysteriously relocated are just a few of the reported phenomena. Extra Credit: In 2006, former student Ryan Buell founded the Paranormal Research Society (PRS) at Penn State. It was a homegrown club on campus that met up to investigate paranormal cases in the surrounding tri-state area. Their paranormal adventures were later chronicled in the smash-hit television show, Paranormal State. 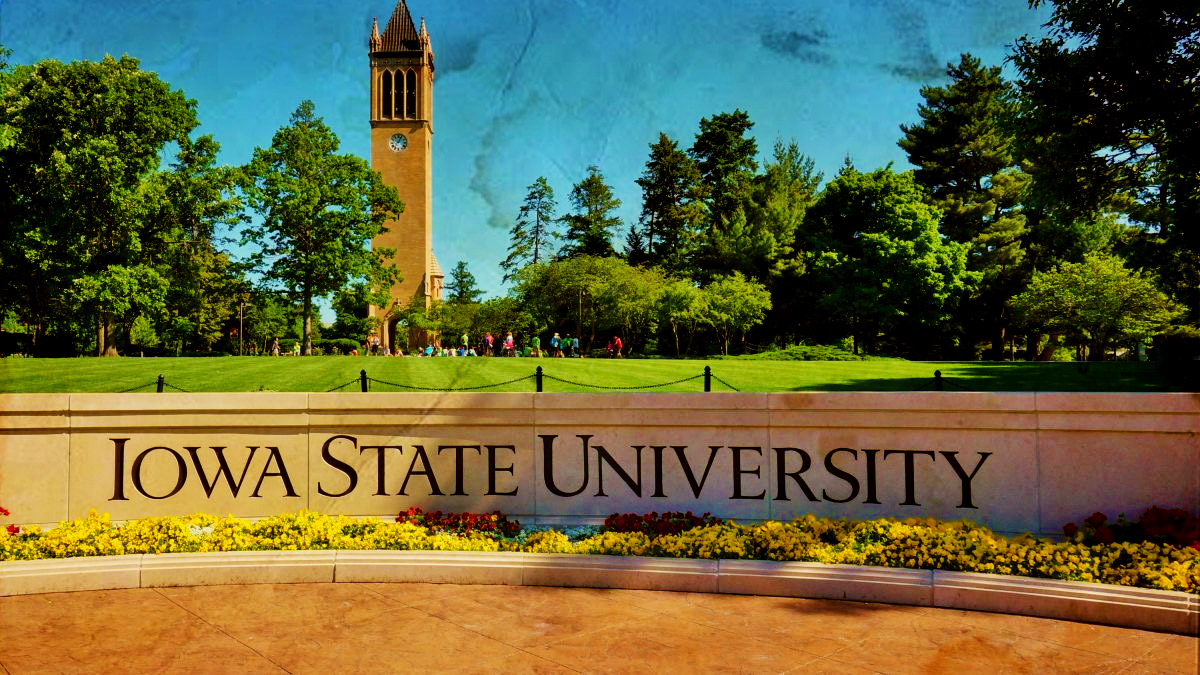 Iowa State may have been founded back in 1858, but it’s very possible that the spirits haunting this campus were there a long time before that. Farm House on campus is said to be haunted by the spirits of two different women who once lived there. While the Farm House is a museum today, the curtains have been spotted by students and visitors mysteriously swaying with nobody in the room. On more than one occasion a female spirit has been seen to manifest and one frightened woman was said to have approached and greeted the spirit before it disappeared into thin air.

Fisher Theatre is still haunted by the spirit of a long-time acting professor that once directed some of the finest plays from her wheelchair. In a chilling turn of events, her wheelchair was donated to the program and still used by the students in plays. And guess what? That very wheelchair has been seen moving and turning….with nobody in it!

The University of Georgia 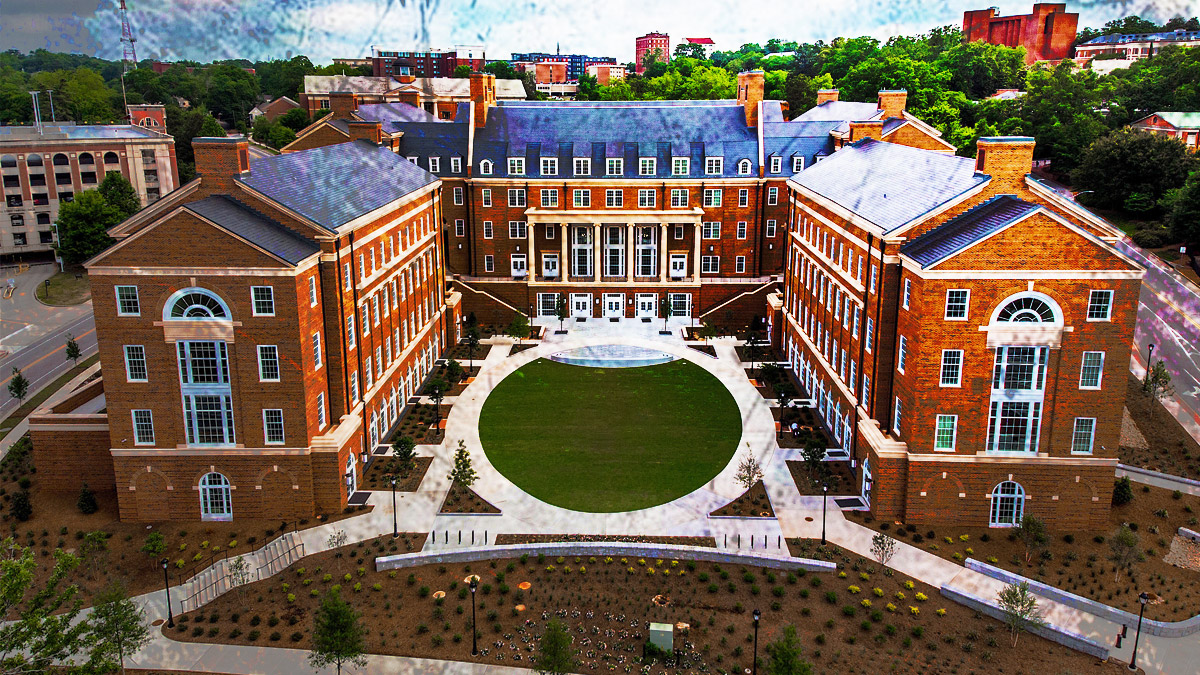 Like in any good horror film, the most haunted place on a university campus is the sorority. Prior to serving as a sorority house, the Alpha Gamma Delta mansion was actually home to a wealthy Athens family. However, the happy home turned into tragedy when the eldest daughter hung herself after being stood up at the wedding altar.

The spirit named Isabel haunts in a variety of ways. The most innocuous is her turning the lights on and off at odd times, along with the occasional door opening or closing to its residents. However the most terrifying of these paranormal acts is that some young women who are getting themselves dressed in front of a mirror have seen the reflection of Isabel in the mirror staring back at them! Demosthenian Hall is yet another one of the university’s many haunted buildings where an ashen grey spirit has manifested to scare some students out of the building completely. 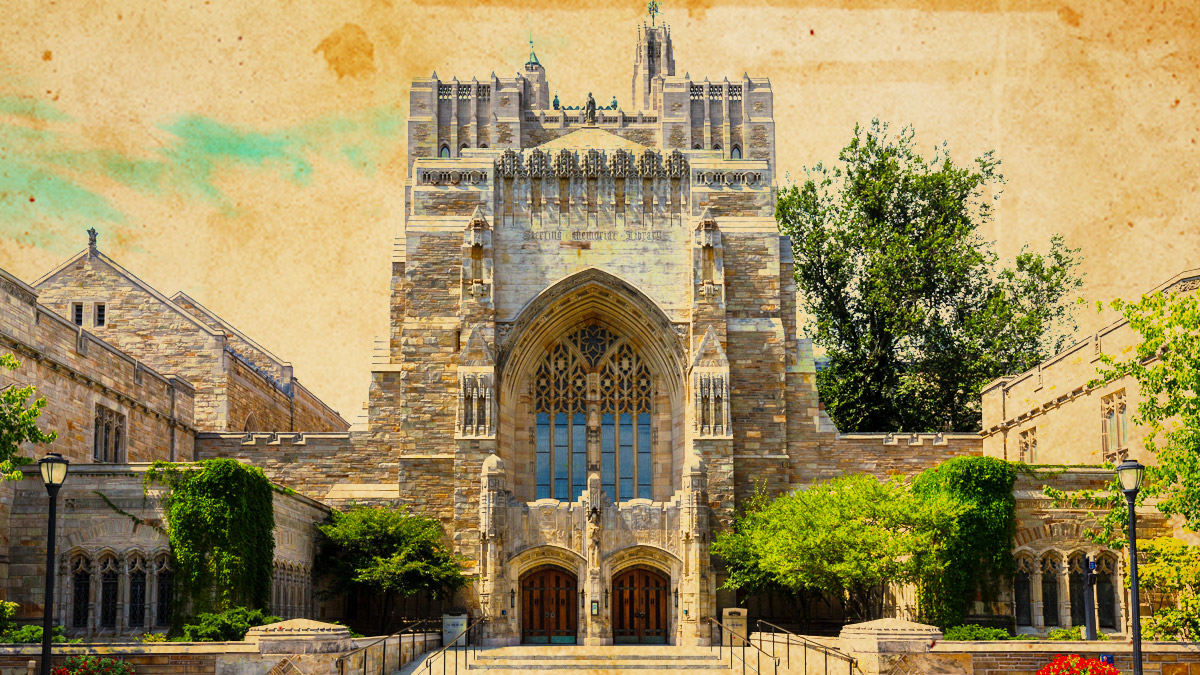 Found in 1701, Yale is the third oldest university in the United States so you just know there are a few ghosts there. On campus is the chilling Wrexham Tower which has its share of dark history. . According to campus lore, three different students at one time or another committed suicide in a third-floor suite there. Intermittently, over the years various students have reported paranormal activity in this particular suite to involve freezing temperatures, voices, doors opening, and closing, all associated with classic poltergeist behavior. As a result of the complaints, Yale has had the room completely sealed to prevent any further dark manifestations from happening.

Outside beneath the New Haven Green walkways used to be an actual burial ground during the Revolutionary War, but bodies were relocated at some point in the 19th Century to the Grove Street Cemetery. Bodies mismatched with headstones have given further credence to the belief that the spiritual grounds of Yale are quite restless and thus the abundance of ghostly hauntings here. 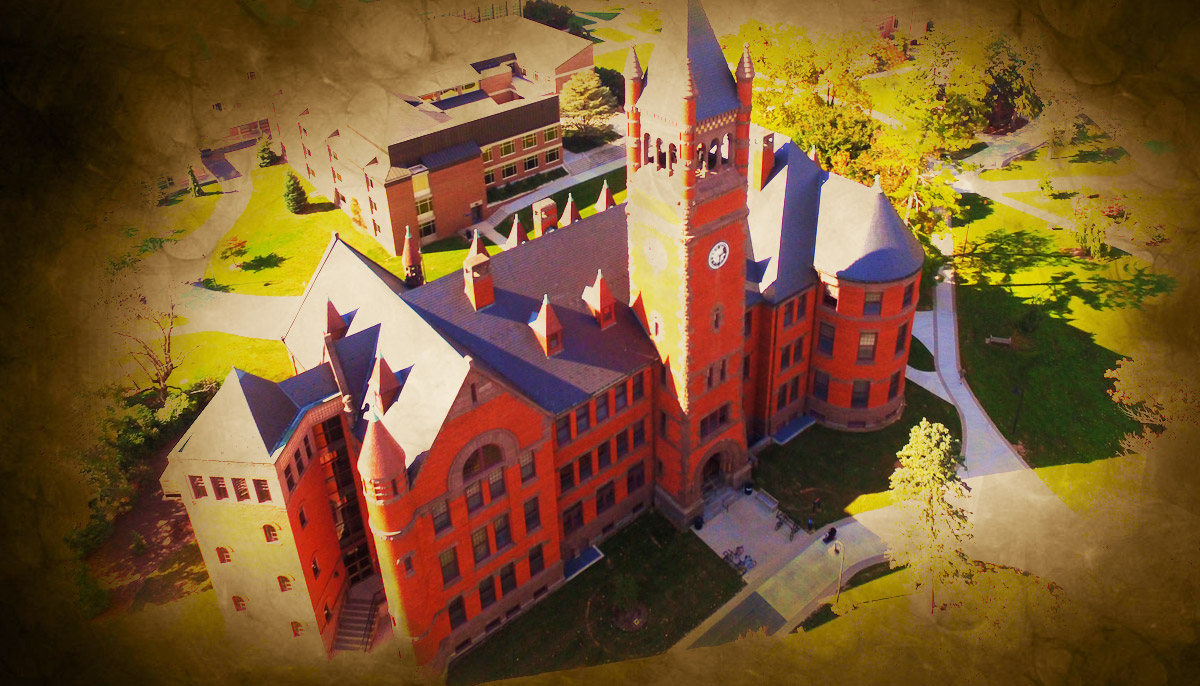 Gettysburg College was founded in 1832, some thirty years before the Civil War and its bloody exploits charged through. Penn Hall is said to be the most haunted place on campus because, after its early construction, the building was used as a temporary field hospital during the Battle of Gettysburg. Reports of the paranormal activity here start innocent enough with lights mysteriously flickering on and off without any provocation or explanation. There are sudden thudding sounds and whispering voices that can be heard in the halls from time to time.

However, it is the basement area of Penn Hall that is the most frightening. Students and campus workers have taken the elevator to the basement and once the doors open, a fully-fledged and manifest Civil War ghost hospital scene is taking place before their very eyes! Virtually all of the other campus haunts here involve Civil War soldier spirits in some varying capacity, making it one of the only college campuses in the United States to be haunted exclusively by spirits from this era in American history. 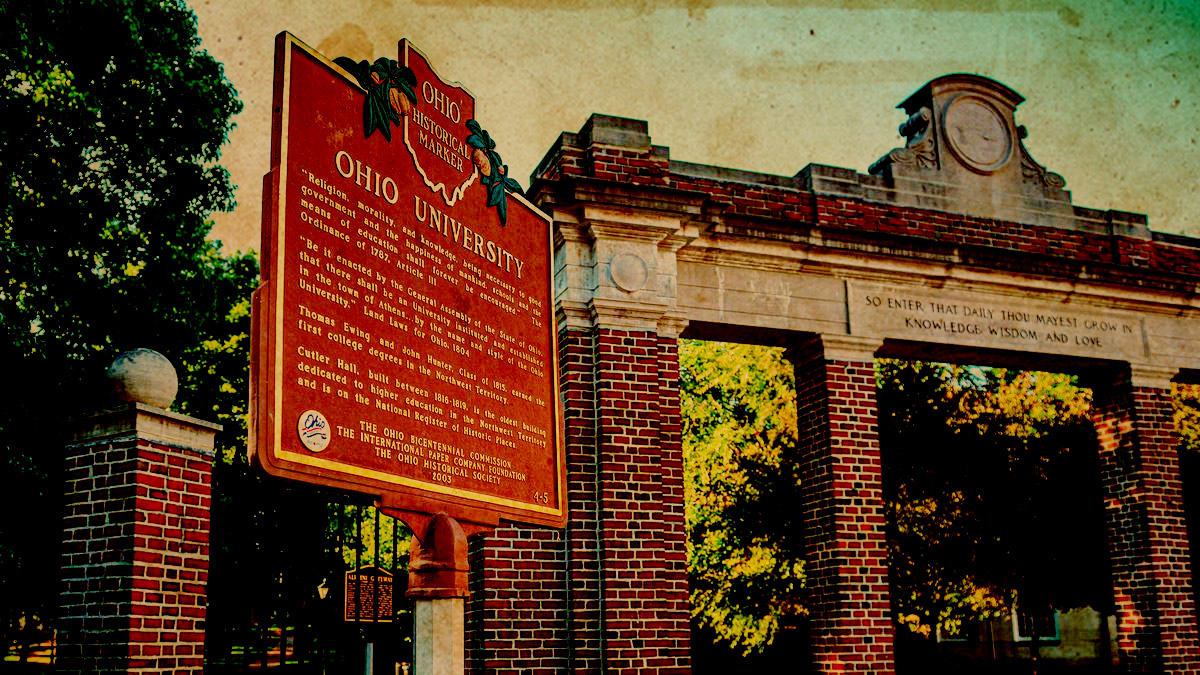 First constructed all the way back in 1804, Ohio University in the sleepy town of Athens is totally unsuspecting on the surface. However, looking closer this quiet campus has more than its share of noisy spirits. Wilson Hall is the most haunted building on campus and Room 428 is often thought of as the epicenter.

Disembodied voices are said to be heard emanating from the room as well along with on and off again pockets of freezing cold air. The activity has been surprisingly real as objects have been seen both levitating and being thrown across the room by an unseen force! In fact, students have claimed to see very demonic-looking faces in the door and threshold of the room. Oral campus legends have propagated that a former female student practiced astral projection among many other things in the room and quite possibly opened up a doorway. Odds are whatever came through didn’t adhere to the admissions policy exactly. 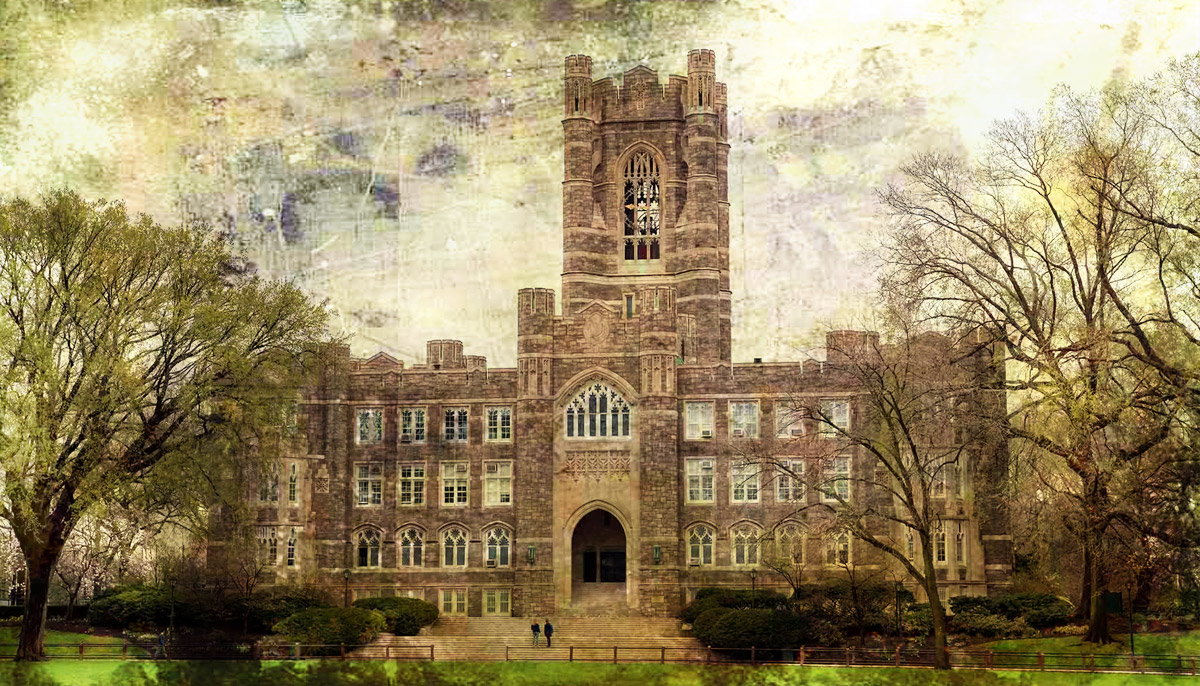 Constructed by the labor and means of the Catholic Church via the Jesuits, Fordham University in Manhattan is one of the oldest in New York City. Is it haunted? With the supremely gothic architecture and design on the outside and the stories that have leaked out, we sure think so! Martyr’s Court is a cross-section area of campus that holds two antiquated residence halls. Students in the dormitory there have for decades seen the spirit of a little girl with blonde hair who peeps from around corners in the bathrooms only to disappear when approached.

Keating Hall (in 1973 Keating Hall was used as a filming location for legendary horror film The Exorcist) had a campus security officer doing a routine safety check for the building only for him to flee in terror as chairs in one commons area were wildly being thrown about the room by an unseen entity! Across campus at Queen’s Court, things were so active one night that a resident Jesuit priest who stayed on campus actually had to perform a ritual blessing to ward off the spirits that caused him and the students in the hall not to get any sleep. 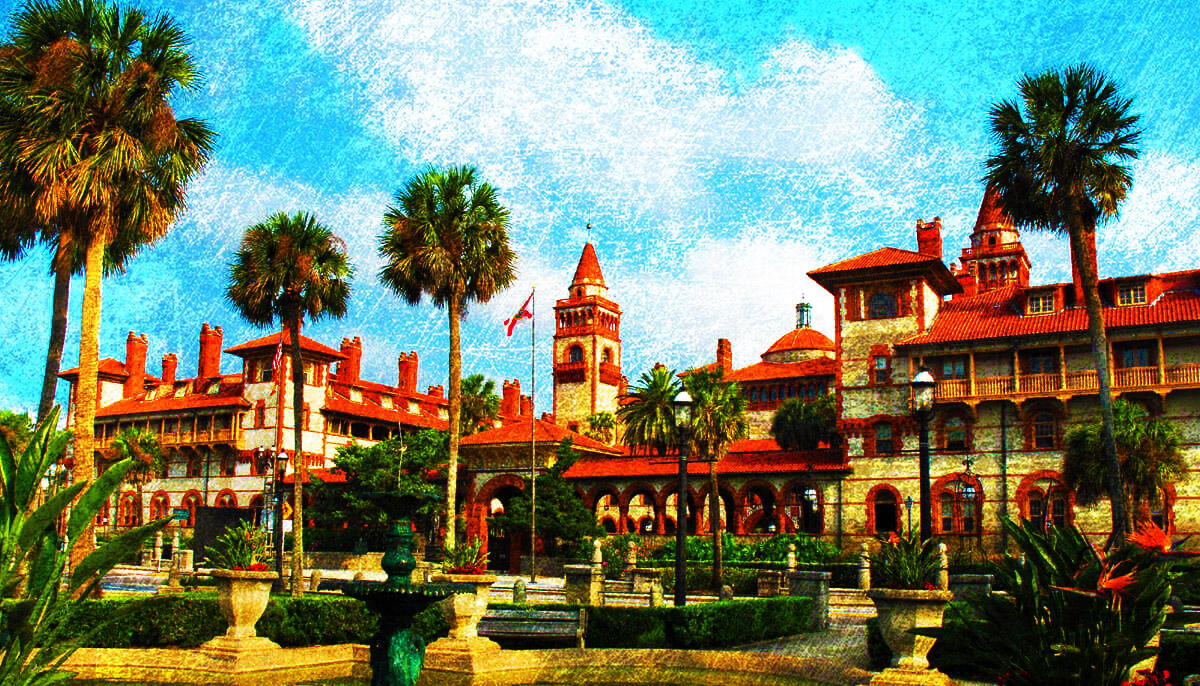 St. Augustine is the oldest city in the United States and it should come as no surprise that it’s very own Flagler College is quite haunted! Said to be haunting Flagler College is none other than the spirit of its namesake, Henry Flagler himself. His death may have been in 1913, but that hasn’t stopped his spirit from being seen for several decades afterward. A popular hotel before it became a college, Flagler actually kept a bevy of mistresses all over town including one at the hotel itself. Haunting the fourth floor, this Flagler mistress entity is known as “The Woman In Black”, and her presence is especially chilling. Adjacent to her former room there, students over the years have claimed to hear high pitched screams as well as see objects flying off shelves. Strange light anomalies have been reported to permeate this area of the hotel that reaches into the college grounds.

Reportedly, a few brave students have breached the closed-off area to the room and a campus rumor claims that some of them entered the room and saw a shadowy figure dangling from the ceiling by their neck. Thinking about taking an official college visit to Flagler? Special attention should be made those prospective students who have taken pictures and left there noticed mysterious shadow figures in their photographs!

Most Haunted Cemeteries in America